Since Twitter has gone public, we’ve frequently heard about their growth problems; in particular, their trouble converting new users into active users. These problems aren’t difficult to believe. As a new user, what do you tweet about? With zero followers, why begin tweeting? And, who do you follow? Your timeline is useless until you follow enough of the right people.

I’ve been mulling over this problem for fun, and thought I’d play armchair quarterback for a blog post.

First, it is important to understand the core product that is Twitter. What is it? Some might call it a social network. Others might call it a micro-blogging platform. These might have been somewhat accurate in the early years, but at scale, I believe Twitter to be something else.

From newswire to newspaper.

There’s just one problem with being the world’s newswire: most people have little to no use for a newswire.

Most people don’t create news to add to a newswire. And, most people don’t keep up with real-time news. This presents a big problem for Twitter. The only way to grow is provide value to a mass audience, and in the history of news, the newswire has never been widely used by the masses.

The good news for Twitter is that the masses do want the news: they just want an easily accessible form of the news. They want a great newspaper. Or a great news report on the TV.

If Twitter understand this, the next steps are clear: Twitter needs to become the world’s best personal newspaper.

And this is just the beginning; the newspaper analogy can be taken further. As an example, The New York Times has various sections including International, Technology, Weather, Sports, etc. Perhaps my personal newspaper should have sections for my interests. These might be generalized Twitter lists, or something else.

Obviously, these are high level suggestions. Designing specific mechanisms for enabling these interactions isn’t trivial. For example, suggestion 2 might change how following works on Twitter, potentially breaking Twitter’s follow limits and increasing follow spam. Suggestion 3 would change Twitter’s relationship with some apps built on top of Twitter (which has always been a shaky relationship anyways).

In a recent interview, Dick Costolo, the CEO of Twitter, acknowledges this, saying that it is OK for users not to tweet (excerpted below).

Farhad Manjoo: Do you ever meet people who don’t use it or don’t know why they would use it? What is your pitch to them?

Dick Costolo: I meet people who way, “Oh, I don’t tweet.” I think there’s still a misconception that the reason they’d sign up is to tweet. When I meet then, I tell them, “No, you don’t have to.”

There is one startup seems to get it. Their product isn’t glitzy, fast, or beautiful, but it solves a need. Nuzzel takes your Twitter account, and generates a daily newspaper of frequently shared links from the people that you follow. This is great for Twitter users who are busy and can’t keep up with the barrage of tweets in their timeline every day. 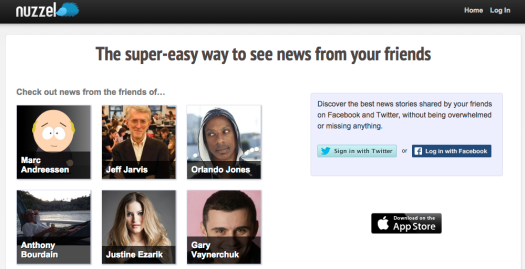 If you check out their home page (above), you’ll also see that Nuzzel lets you see the links frequently shared within other people’s newsfeeds (just like suggestion 1 earlier).

If I were Twitter, I would think about acquiring Nuzzel.