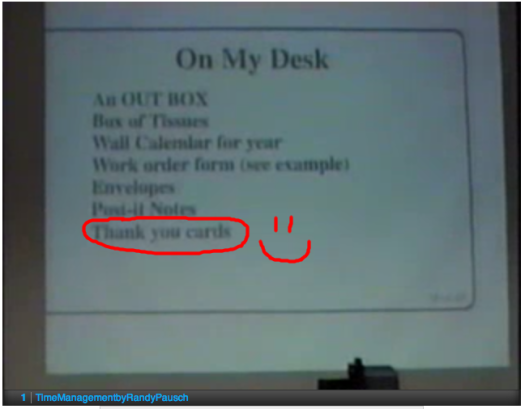 This is a screen capture from a talk by the late Randy Pausch on time management. If you haven’t seen the talk, it is a great talk. Highly recommended.

During the slide, he mentions the importance of focus and organization in your working environment, and uses his desk as an example. He only has a few his desk:

The last one stuck out at me. How many people have thank you cards on their desk?

Randy goes on to explain the importance of ‘thank you’s. People don’t say thanks enough, and it can make a huge difference. We tend to focus on the bad stuff in life, and forget the good. ‘Thank you’s help remind people the good that they have done. Even if nothing has gone wrong, that in and of itself can be a good thing. Randy mentions often thanking is secretary when things have gone smoothly: “a few weeks have gone by, and nothing has gone wrong. Thanks!”. There are even benefits to saying ‘thank you’. Once Randy thanked an attendee at a conference, who turned around and offered him a lucrative contracting job. So saying ‘thank you’ may even be a great strategy for advancing your career. Even so, the reason to give thanks is because it is the right thing to do.

This particular part of the talk greatly inspired me.

My desk is cluttered with much more than seven things on it, and none of them include thank you notes.

Perhaps it is time to get some, and spend some time actively giving thanks.

It also makes me think. Written letters are great because they feel very personal, but they require time, as well as a known mailing address. Email is more convenient, but feels less personal.

Is there a better way to send thanks? Hmmm.. perhaps there’s an app for that. If there isn’t, there should be 🙂