Both sites drive incredible amounts of web traffic, and rank highly in the Alexa rankings. Both are horizontal in nature, using a single set of interactions across a wide range of verticals. Both support openness, allowing use cases that are both savory and unsavory. And although both are very functional, they are among the ugliest websites on the Internet.

The unbundling of Craigslist.

Craigslist has remained remarkably successful through the years. Arguably, there hasn’t been a strong competitor since its founding in the 90’s. If anything, competition comes from an unbundling trend, with 100s of startups that are competing to provide a better user experience for specific verticals of Craigslist.

Years ago, Andrew Parker put together a great picture of all the startups competing within verticals of Craigslist. More recently, Chris Dixon has echoed a similar sentiment. 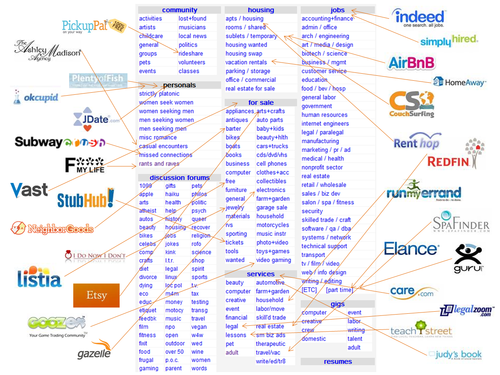 Startups competing with verticals of Craigslist. (via Andrew Parker’s blog)

Although it hasn’t been written about much, the unbundling trend is going to happen to reddit also. Actually, it has been happening for a while, and it will continue in the foreseeable future.

Here are a few examples:

What else? I would love to build out a more comprehensive list here.

What makes a vertical startup viable?

Each startup within a vertical must satisfy two constraints.

First, there must be a compelling value proposition. It may be the community, the user experience, or whatever. But it must be enough to make users of horizontal company switch products.

How would horizontal businesses respond?

The horizontal approaches usually have larger scale, and therefore larger network effects. To squash startups in a particular vertical, they must be nimble enough to observe what works, and improve their user experience for the particular vertical. This is asking a lot from a large company.

If that doesn’t work, they can acquire the company, or hope another company acquires them (since it seems most acquisitions kill a companies product either explicitly, out of neglect, or through mismanagement).

Facebook has changed dramatically since the early days. It’s “move fast, and break things” adage helps out here. Twitter continually tries new experiments, including the recent Twitter music. LinkedIn is in the midst of a drastic change with a new social feed, and with influencer blogs.

On top of that, these social networks have been more aggressive with acquisitions of startups that begin to show success.

This brings us to one last similarity between Craigslist and reddit. Both of them don’t seem to move very fast. From a design and functionality standpoint, their user experiences have not changed much over the years. In fact, they almost seem stubborn, refusing to change with the times. Also, they don’t seem to acquire many competitors.

Why is this the case? I don’t know. But, my guess is that this leaves both Craigslist and reddit more vulnerable to unbundling effect, and this is a good sign for startups building within their verticals.

Any thoughts? What other companies are verticals of reddit? What are properties or strategies for successful companies within these verticals? And why do the social networks behave differently when compared to Craigslist and reddit? I would love to hear some different perspectives here.

Check out my latest project Soulmix.

(P.S. I later wrote a post on the flip side of this argument)